This is an absolutely epic song by Ohio Electronic Trio, Magic Sword. The piece was used in one of my favorite video games, Hotline Miami 2: Wrong Number. It comes from a genre of music called Synthwave, which is a throwback to old 80’s action movies and heavy synth. It starts with the wind blowing, accompanied by a repetitive drum beat. Next, the epic bass and synth start playing, and this is where things get awesome! The synth starts playing a very catchy rhythm, and then the drum signals a tempo change. The ending result is a bass and synth heavy instrumental ballad of epic proportions! I absolutely  adore this work of musical genius, and I’d love to hear what you guys think of it in the comments’ section below.

Hello everyone, and welcome to the weekly Sunday post! Every Sunday, I will be adding a random topic to my blog. It can cover anything, from strange colors to weird names. I am also taking requests, so be sure to leave some ideas in the comments’ section below. Now, let the chaos begin!

Colors found on various internet sites like wikipedia and mentalfloss

Colors are all around us, and all represent different things. I am visiting uncharted territory to discover the most absurd colors. Now, let’s get weird!

Info about manga from toriko.wikia.com and en.wikipedia.org

Hello fellow manga lovers! It’s Sunday, and my museum is open once again. I hope you are ready for this weeks’ exhibit. Now, I declare the new exhibit officially open!

Toriko is an incredibly unique and amazing series that will have you hooked from day one. The story takes place in the Gourmet Age, a time of amazing food and dangerous animals. People hire a special group of individuals called the “Gourmet Hunters” to capture and deliver the most dangerous foods. These wild beasts have capture levels based on their ferocity. Komatsu, the head chef of a six-star restaurant in Hotel Gourmet, is sent out to hire a Gourmet Hunter named Toriko. The boss of Hotel Gourmet wants to serve the meat of the most prized Alligator called the Garara Gator. The Garara Gator has a capture level of 8, and is the size of a tank! Our first glimpse of Toriko is one of shock and awe. He is a huge 7ft 2in man with a ridiculous appetite and astronomical strength. Komatsu tags along with Toriko, and they finally find the colossal gator. This is when we first see Toriko at full power. Using his hand like a knife, he chops the gator in half! As the story progress, Komatsu and Toriko get closer, and eventually they become cooking partners. This is one series that I have to recommend to absolutely everyone. The entire story is very unique, and the food depicted in the anime will make your mouth permanently water. The manga is chalk full of colorful characters, and equally delicious foods. I believe that one of the morals of the series is that size does not matter as long as you have a good heart and determination. Be warned! When watching the anime, have some snacks close by, you will need them! 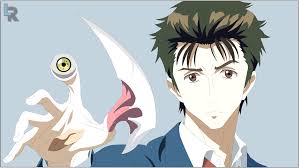 Information about author and other essential facts found on en.wikipedia.org

Hello fellow Manga lovers! It’s Sunday, and a new piece has been added to my Museum. I hope you guys are ready for this week’s artifact. Now, let’s begin!

This is an incredibly creepy and extremely unique Horror Manga series. It definitely has taken some influence from John Carpenter’s gory film, The Thing. The story centers around Shinichi Izumi, a fearful, but compassionate High School student. During the night, creatures known as Parasites land in Tokyo, and begin to infect people. One of these creatures attaches itself to Shinichi, and burrows into his left hand. When he wakes up the next day, he horrifically finds out that his right hand was eaten by the parasite. The creature begins to explain to Izumi that its species feed on humans for food, and then control their bodies. The creature is named Migi, and now Izumi has to have a relationship with this creature. Migi significantly increases Izumi’s physical abilities, and can turn his arm into bladed weapons as a means of self defense. Izumi wants to use Migi to destroy the other parasites who plan on wiping out the human race. He also has the challenge of hiding his “weapon” from others. This becomes especially difficult when Izumi hangs out with his best friend, Satomi Murano. The story progresses, and more parasites are defeated by the strange duo. The emotions really start to seep through the pages, during a spoiler-heavy event. I do not want to ruin what happens, but let’s just say it can make you cry. Izumi’s character develops as the story moves forward, and it finally finishes with a fantastic ending. The manga also has an anime, which is absolutely fantastic, and very truthful to the base material. Both the book and TV show are extremely violent and disturbing, so this is definitely a series that’s not for a younger audience. The anime can be watched for free on crunchy roll.com. I really enjoyed reading and watching Parasyte, and I believe that it might be one of the best series out right now. If you are a fan of Horror films and gripping stories, I strongly suggest that you check it out. I would throughly enjoy hearing your thoughts on the series and recommendations of manga to review in the future.

Below I will be posting the links for both the manga and anime, and I hope that you will enjoy them.

Hello fellow followers! I would like to start this new topic with some backstory. For as long as I can remember, I have always had a fascination with Japanese culture. This passion first awakened when I saw Hayao Miyazaki’s amazing film, Spirited Away. The colorful characters, animation, and overall message stuck with me and opened up a hidden door in my mind. Then, when I turned 8, I found the “key” to my mind’s door in the form of manga. For those who do not know, manga are Japanese comics that are read from right to left. I believe that they portray emotions in a much more powerful way then they do in western comics. You are in the character’s shoes from beginning to end, and when it ends, you hunger for more. This topic is created to admire the many stories of the past, and how they helped shape me into the man I am today. Now, without any further ado, let’s get started!

What better way to start Sunday’s new topic than with one of my favorite manga. The manga first introduces us to the main character, Uzumaki Naruto. He’s a 12-year-old student ninja of Konohagakure, (The Village Hidden In The Leaves), with a knack for doing pranks. He has no parents, and is extremely immature. He also has a nine-tailed fox spirit resonating inside him that was sealed by the Fourth Hokage (Village Champion). In the beginning of the series, Naruto is often made fun of by the other students, and continuously told that he will never become anything in life. The only people who treats him with respect are his teacher, Iruka, and another student, Hinata. This part made me feel extremely empathetic towards Naruto, because I used to worry about people accepting me. He gets put into a 3-man squad for the final test of moving up the Ninja ladder. His two other teammates consist of an abusive, volatile, kunoichi (female ninja) that’s madly in love with the other member of the team. That member is Sasuke, an extremely talented, and cocky ninja. At first, they see Naruto as a bumbling goofball with no real talents. However, as the series progresses, they begin to develop respect and kindness for him. This reminds me of many underdog stories, and it gives me a huge morale boost to never give up. The development of Naruto as he gradually grows up is one of the best parts of the series. You feel pain when the characters feel pain, and this is one of the best things that a manga can do. The  main character is so relatable to me, and the gradual increase in maturity also applies to my life as well. I read the series as I grew up, and that’s probably why I hold it so dearly. The anime of Naruto is also very well made, and you can watch it for free on Crunchyroll.com. I highly recommend this series to absolutely everyone, and I would love to hear your thoughts about it in the comment’s section below. So, pick up a copy of the first volume ASAP, and prepare to go on a roller coaster ride of emotions!

Computer Guy by Savlonic from the album “Red” 2014: This is a very cool Electronic piece that fills the listener’s head with melodious energy. It starts with an old “Dial-Up” sound, and then Sarah’s vocals start up. They have a very mysterious tone, and are quite beautiful as well. The song is about a futuristic, tech-savy guy, and the mysteries that surround him. The music video of this piece is absolutely wonderful, and expertly animated. I highly recommend this song to anybody who likes Electronic music. Be warned! The chorus will be stuck in your head for a long time!

Tell me what you think of this piece in the comment section below.

Fuck Gravity by Virtual Riot from the album “100% No Bangers” 2014: Allow me to introduce you to the amazingness that is Glitch Hop. It’s a unique style of music that blends Hip Hop with electronic sounds. Virtual Riot is a German DJ that is a master of this genre. The track starts with a synthesized beat that repeats for about 10 seconds. Next, we get the first drop, and your ears are assaulted with electronic brilliance. Astonishing as it may be, that’s not the final drop! A few seconds after the first drop, we get to the second one, and it just rocks! If you are a fan at all of Electronic music and Dubstep, pick this up ASAP!

Tell me what you think of the piece in the comment’s section below. Happy Listening! 😀