Hello fellow art lovers! It’s Monday, and you know what that means! Yes, it’s time for us take a look at some more trippy artwork. Now, let’s dive into the amazing world of Larry Carlson!

This is my first time seeing this awesome piece, and my god, it’s glorious! Your eyes are immediately bombarded with an overwhelming display of vibrant colors and shapes. Starting from the painting’s top, we see brilliants wisps of blue and green that stick out like eldritch fire. The titular Werewolf is also quite a fantastic site. His ears appear to have two extremely grotesque demons that give off a very ominous vibe. They’re a brilliant blend of reds, pinks, greens, and yellows. A demon actually makes up the canine’s nose, and its eyes seem to follow your every move. The beast’s eyes are giant teardrops that gaze into the viewer’s soul. Then, we get to his mouth, and what awaits us is true fear! His giant maw is filled with ultra-sharp teeth, and an expression that emanates chaotic malice. He actually has a secondary mouth, that’s located just below his first. The bottom of the piece finishes the job with an awesome explosion of rainbow energy. Tell me what you think of this piece in the comments’ section below. 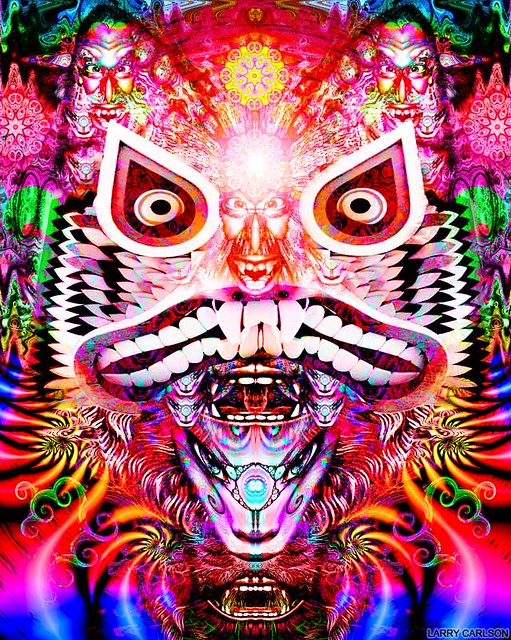 This hypnotic work is definitely one for the record books. At first, all you see is a multicolored spiral of awesome patterns and shapes. However, if you look even closer, you can make out faces and other creatures within the vortex. The faces are extremely similar, if not taken directly from a Junji Ito manga. Ito is known by many as the “King of Horror Manga”, and his stories even give me the shivers. He has the uncanny ability to make everyday objects look downright horrific. They all portray looks of pure horror that make the viewer’s hair stand on end. This is especially seen with the skeletal men with Glasgow smiles.  It almost seems as if Carlson has portrayed what LSD Hell would look like. We also see some agonizing maws hidden within the chaos. I’ve never seen Carlson create something so dark before, but I completely love how he’s able to adapt to new styles on the fly. Tell me what you think of this piece in the comments’ section below.

Hello fellow food lovers! It’s Friday, and you know what that means! Yes, it’s time for us to take a look at some more delicious foods. Now, let’s dig in!

This incredible song first came to my attention when I heard it at the One Up bar. I tried to Shazam the song, but I never could get the timing correct. A few months later, I hear the song again in James Franco’s film, The Disaster Artist. I finally find out the title of the song, and now listen to it on a daily basis. It is a very unique Metal song that has multiple genres built into it. Mike Patton’s impressive vocals reach six octaves, which is the highest range of any popular singer. Throughout the song, he impresses us with his amazing vocal styles, like crooning, rapping, falsetto, wailing, and growling. It resembles a lot of popular bands vocals like, The Red Hot Chili Peppers, Rage Against The Machine, and The Beastie Boys. The song appears to be discussing an unknown entity that is only known as “it”. The lyrics “What is it?” continuously repeat through the song, and it almost seems like the band is going crazy trying to figure it out. The chorus is my favorite part of the song, and once it hooks you, you will not be able to get it out of your head. I believe that the song’s meaning can be interpreted in various ways, but I will discuss my thoughts on it. The title, “Epic”, may have to do with the huge variety of different styles in the piece, and how well they go together. I highly recommend this piece to absolutely everyone, and would love to hear what you think in the comments’ section below.

Hello fellow comic book fans! It’s Tuesday, and you know what that means! Yes, it’s time for us to take a look at some more strange characters. Now, let’s begin!

Grant was an angry wrestler that wanted to become part of the UCWF. (Unlimited Class Wrestling Federation) He used gypsy magic to build up his strength requirement, but this also changed his skin bright green, and gave him scales. The Thing managed to subdue him, before he transformed into an Alligator. He finally reverted back to human form, but his scales are permanent.

The man only known as Fever Pitch got his powers at an unknown time. When they manifested, they blew his face off. After a while, all that remained of him was a flaming skeleton. He tried to fight agains the X-Men, but was quickly defeated and seemingly killed by the mutants.

Hello fellow Pokemon Trainers! It’s Monday, and you know what that means! Yes, it’s time for us to look at some more crazy entries. Now, let’s begin!

Entry: Did you know that Fochun and Ebin contain hidden secrets unknown to man kind? Be sure to find them all.

Hello everyone! I’m finally back from vacation! A post on that will be made in the near future, so be ready for it! It’s time for us to once again look at some more awesome tropes. This will be done randomly, so that each entry is unpredictable. Now, let’s begin!

Hello everyone, and welcome to a brand new topic! Every Other Saturday, I will be searching for some random tropes, and describing them in a spoiler-free way. In case you didn’t know, a trope can be defined as an expression or overused cliche found in movies and other media. TV Tropes.org categorizes thousands of these expressions and cliches throughout the world of media. This ranges from certain character quirks, to the series as a whole. I find it to be quite enjoyable, and I hope you guys will too. Now, let’s begin!

Hello fellow Duelists! It’s Friday, and you know what that means! Yes, it’s time for us to take a look at some more crazy cards. Now, let’s duel!

This card is next to useless, and it is a huge detriment to whoever plays it. The only way I can see this card being used is to make your opponent hurt themselves in the battle.

This ultra-bizarre card has a very good effect. For starters, it has very high defense, and if you can keep it on the field for long enough it can easily win you the duel. Unfortunately, due to a bunch of counters, this card won’t see a lot of play.

Hello fellow Cicerones! It’s Thursday, and my Pub is open once again! I hope you guys are  ready for some awesome drinks. Now, let me fix you up something special!

Directions: Stir rum and vermouth with cracked ice and strain into a cocktail glass. Top with the black olive and serve.

Directions: Combine all ingredients in a cocktail shaker half-filled with ice cubes, and shake well. Pour over ice in a tall glass, and serve.

Ninja Sex Party are a comedic music duo consisting of Game Grump, Danny “Sexbang” Avidan and Theoretic Physicist, Brian Wecht. They are known for creating some of the best and most catchy comedic music on the internet. The music video for this song features Finn Wolfhard, the voice of Mike Wheeler from Stranger Things. It also is probably my favorite NSP song with “6969” coming in second. The song is an epic retelling of Dan’s life story. It starts with him as a child, and gradually progresses to adulthood. The song is filled with charm, and the ending will give you chills! I highly recommend this piece to absolutely everyone, and I’d love to hear your opinions in the comments’ section below.