Hello fellow Cicerones! It’s Thursday, and my Pub is open once again! I hope you guys are ready for some awesome drinks. Now, let me fix you up something special!

Hello everyone, and welcome to an extremely special post! I have been a major fan of Web Animation for my entire life, and have finally decided to share some with you. Most of these animations will be found on Youtube, with the exception of one. Now, let’s be blown away by these fantastic works of art!

I just found out about this video yesterday, and my god, it’s fantastic! The animation is essentially a loving homage to the classic rage games. If you’ve ever played “I Wanna Be The Guy” or “Cat Mario”, you’ll know exactly what’s in store for you. The movie is about a couple that gets sucked into the most punishing Video Game ever made. The boy gets kidnapped, and its up to the girl to save him. The animation is incredibly fluid, and the pulse-pounding Dubstep soundtrack really adds tension. I’m not going to ruin the ending, but let me just say, it’ll leave you in tears!

Me! Me! Me! is a mind-blowing music video by Japanese DJ, Teddyloid. It tells the story of a Hikikomori Otaku or “shut in”. He’s visited by a harem of busty anime chicks, and crazy stuff starts to happen. The music does a fantastic job of portraying suspense and anxiety. The piece is extremely catchy, and you’ll be humming the tune for hours on end. This video, however, isn’t for kids, as the subject matter and content is very adult.

I feel like I’ve done Cyriak a major disservice for never mentioning him in any of my posts. In was you don’t know, Cyriak is a British animator whose style is unlike anything you’ve ever seen. It’s usually a mix of crazy fractals and shapes with some hints of surrealism. I absolutely adore his wacky style, and binge his animations frequently. This animation, is about a war between aliens and cows. The artwork gets extremely bizarre, and it’s accompanied by an even stranger soundtrack. I highly recommend this video, as it will get you a first look at Cyriak’s humor and style.

Hello everybody, and welcome to a very special post! I have discussed the Morlocks in the past, and have decided to dedicate my weekly comic posts to a different Mutant team.  In case you don’t know, the Morlocks are a group of Mutants that live underground. They have extremely weird Superpowers, and are ridiculed by the general public. Many of them are killed during the Marauders’ invasion, and those who survived, try to rebuild their damaged home under the strong leadership of Callisto. The Morlocks are all property of Marvel .

Masque was a power-hungry member of the Morlocks. After the massacre, Masque decided to usurp Callisto, and take control of the team. He then joins the Brotherhood of Evil Mutants, and tries to fight against Nathan Summers. Masque meets his end at the hands of the engineered super solider, Shatterstar.

Angel was an ordinary child until her Mutant powers awakened. Afraid that her parents wouldn’t accept her, Angel ran away to the sewers to join the Morlocks.  After many adventures with the team, Dust returned home, and was accepted by her parents.

This is a very funny work by “Master Surrealist”, Larry Carlson. The titled “queen” has a white pill for a head, and a candy-striped dress. The background is covered multicolored sparks and strange snowflakes. There’s also bizarre, multi-faced spheres with a foo dog floating above one of them. I enjoy the piece both for its humor, and for its creativity. 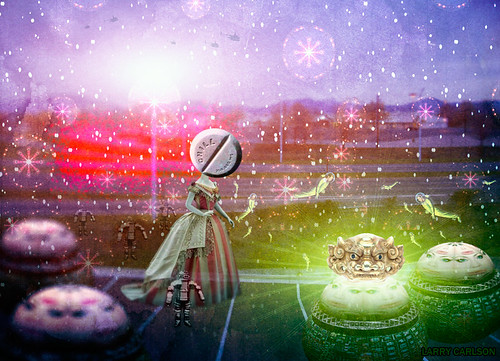 This is a beautiful work by “Computer Guru”, Larry Carlson. It’s a space scene with a variety of strange occurrences. The background is a brilliant azure blue with rainbow stars and orange dots. There’s also a humanoid figure that’s colored like a beautiful rainbow. Tell me what you think of this piece in the comments’ section below. 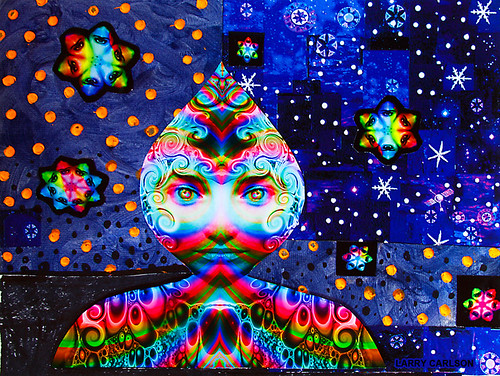 Hello fellow Cicerones! It’s Thursday, and my Pub is open once again! I hope you guys are ready for some awesome drinks. Now, let me fix you up something special!

Directions:  Pour vodka, blue curaçao and sour mix over ice in an old-fashioned glass. Fill with 7-up, and serve.

Directions: Shake ingredients well in a shaker. Strain into a cocktail glass over three or four ice cubes and serve.

Konichiwa, everyone! It’s Wednesday, and you know what that means! Yes, it’s time for us to take a look at some more fascinating yokai. Now, let’s go on a journey to the “Land of the Rising Sun”!

Hello fellow gamers! It’s Tuesday, and you know what that means! Yes, it’s time to take a look at some more fascinating board games. Now, let’s play!

Description: This is a German board game that relies on stones. Each player puts a stone on the field during their turns, and tries to complete a row of four. Whoever has the most rows when the board is filled wins the game.

Description: The object of the game is to score the most points. It’s split into five rounds where players flick dice to brush paint on a canvas. The player whose masterpiece is worth the most wins.

Hello fellow Pokemon Trainers! It’s Monday, and you know what that means! Yes, it’s time for us to take a look at some more strange entries. Now, let’s begin!

Entry: A Wifemin will remain loyal to its trainer until the end, no matter what happens between them.

Entry: They suddenly appeared when Hoenn was confirmed. They take great pride in annoying others, even if it faints in the process. (Its cry is super loud and annoying)

Hello fellow Duelists! It’s Friday, and you know what that means! Yes, it’s time for us to take a look at some more awesome cards. Now, let’s duel!

Steelswarms are a very fun archetype in Yu-Gi-Oh! They’re all Fiend types, and focus on overwhelming the opponent with powerful monsters. Its high attack power and amazing effect make it extremely versatile in any Fiend deck. It also helps that its effect can be used outside of battle. I highly recommend this card to dry your opponents crazy!

This chaotic card was the bane of many people’s existence when the game first began. Unfortunately, the card has been banned for many years, and for good reason too. Its effect is way too good, and you can clear your opponents field extremely easily. Nevertheless, I adore this card, and from what I hear, it’s going to be coming back to the game quite soon.

This is going to be embarrassing! Hello everyone, and welcome to a very special post. In the past, I have shared many of my favorite songs on Asher’s Jukebox. This is an entirely different beast! I am going to get real personal on this post, and share some of my guilty pleasure song with you. These certain songs don’t have to be widely enjoyed by all, but they are ones that I enjoy for some reason or another. Now, let the cringe begin!

Yes, I actually like a will.i.am song! The “mastermind” behind such hits as “Dirty Bit” and “Boom Boom Pow”. I think this song just works really well with both artists. The beat while repetitive, is extremely catchy, and will be in your head for days. The lyrics are complete crap, though, and you have to deal with Britney calling you a bitch for 4 minutes.

Good old Captain Beefheart! This man’s life story is incredibly fascinating, and his music is extremely experimental. This particular album is praised by many, and even the Simpsons creator, Matt Groening, states it as his favorite album of all time. I got introduced to Beefheart after looking up strange footage of a video game called Fast and Bulbous. This track, Pena, is absolutely nuts with screamed vocals, abstract imagery, and the strangest musical composition I’ve ever heard. The instruments appear to be screaming at one another, and the time signatures are completely indecipherable. Well it might not be for everyone, I absolutely adore this piece. If you are a fan of Frank Zappa, you’ll love Captain Beefheart! Posted below is the song, as well as a great documentary on the man himself.