Hello fellow Mixologists! It’s Thursday, and my Pub is open once again! I hope you guys are ready for some great drinks. Now, let me fix you up something special!

Directions: Build in shot glass. Float Bailey’s in amaretto and top with 151. The Bailey’s should float in the middle.

Directions: Serve in a tall glass over ice.

Info found on comicvine.gamespot.com, The Legion Of Regrettable Super Villains, and various DC and Marvel encyclopedias

Hello fellow Comic Book lovers! It’s Tuesday, and you know what that means!

Frank Oliver was an Australian man that was obsessed with kangaroos. He trained his body to be identical to the animal, and finally was successful  He was forced to flee his homeland after killing a man in the ring. Frank encountered Spider-Man, and was defeated easily by the Web-Crawler. He later had his powers enhanced by the criminal scientist, Dr. Jonas Harrow. Frank met his demise when attempting to steal a radioactive isotope.

Jalome was a Chemical Engineer that discovered a virtually frictionless substance. After getting fired from his company, he robbed a bank and met Spider-Man. He later joined the Masters of Evil, but was quickly captured and imprisoned.

Hello fellow art lovers! It’s Monday, and my Gallery is open once again! I hope you guys are ready for some fantastic works. Now, have fun exploring my Gallery!

This is a gorgeous Japanese work by painter, Kitagawa. The print is of a beautiful Japanese woman with a peach and red colored kimono. She is holding a mystical blanket that is covered with pink flowers. This piece may be old, but it has not lost any of its beauty. Tell me what you think of this work in the comments’ section below.

Konbanwa, everyone! It’s Wednesday, and you know what that means! Yes, it’s time to to a look at some more fascinating creatures. Now, let’s go on a journey to the “Land of the Rising Sun”!

All works found on larrycarlson.com

Hello fellow art lovers! It’s time for our weekly dose of awesomeness! I hope you guys are ready for some wonderful works. Now, let’s get started!

This is yet another fantastic piece by “Computer Guru”, Larry Carlson. It’s a very colorful and trippy work. There are rainbow vortexes and for some strange reason, a duck. It almost reminds me of an optical illusion, and my god, it’s glorious! Tell me what you think of the piece in the comments’ section below. 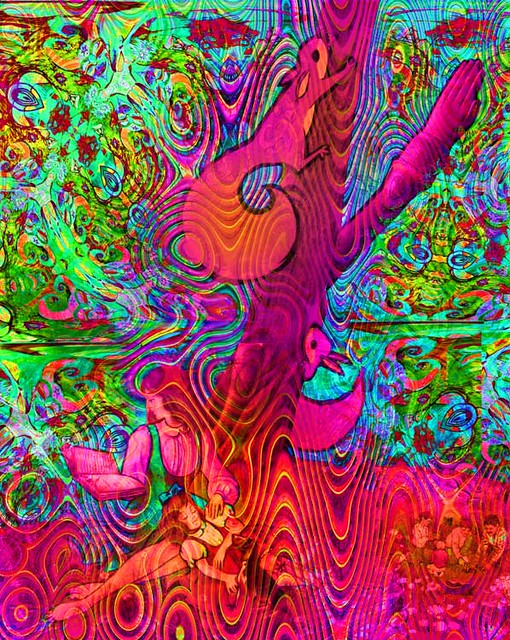 This is a very strange collage by “Master Surrealist”, Larry Carlson. We see a strange man with a bird’s nest for a head. He also has some prehistoric lizards surround his torso. I love Carlson’s blend of Realism and Surrealism. Tell me what you think of this work in the comments’ section below. 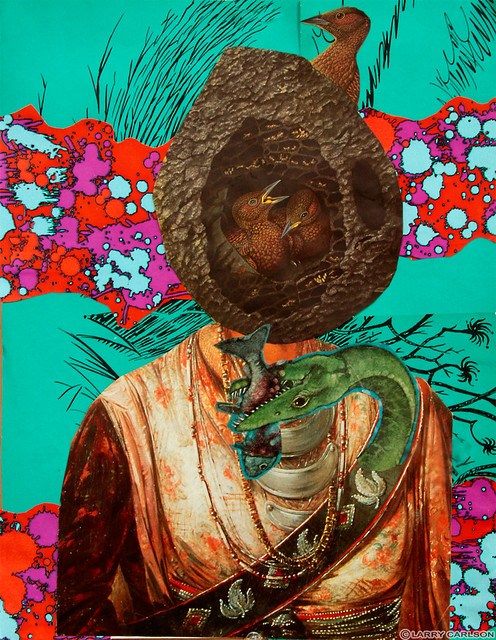 Happy Saint Patrick’s Day, everyone! This weeks’ food special will be completely Irish oriented to celebrate. Now, let’s dig in!

Hello fellow Mixologists! It’s Thursday, and my Pub is open once again! I hope you guys are ready for some great drinks. Now, let me fix you up something special!

Directions: Shake over ice in a shaker. Strain into a chilled cocktail glass, and serve.

The Bubble Shell is a species of mollusk that has a gorgeous florescent blue body. It defends itself by regurgitating food and withdrawing into its shell. Like most mollusks, The Blue Shell is a hermaphrodite.

The Sweetlips is a deep-bodied fish with small spots. They group up together at dusk, and get cleaned by wrasse. The fish gets its name from its large lips, which are used to hunt for prey in the sand.

Hello fellow art lovers! It’s Monday, and my Gallery is open once again! I hope you guys are ready for some awesome works. Now, have fun exploring the Gallery!

This is a very beautiful work by “Color-Field Painter”, Morris Louis. It’s a fantastic blend of vibrant colors and striped patterns. It almost has a dreamlike quality to it, and this adds to the overall feel of the piece. Tell me what you think in the comments’ section below.

Here we have another amazing work by “Computer Guru”, Larry Carlson. This piece has a native setting with accompanying temple. There are two masked figures with 2 different objects. The first object is a strange toucan, while the other is a nose-ringed serpent. We also see a very trippy  aura, combined with a strange rainbow staircase. I’d love to hear what you guys think of this piece in the comments’ section below. 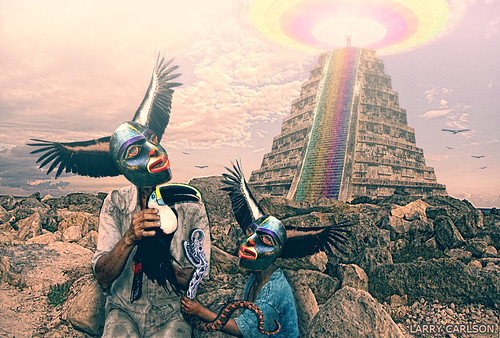 Hello everyone, and welcome to another dose of randomness! This week, I will be covering some new pokedex entries. The world of Pokemon is a lot darker that one might think, and seems to push the boundaries of the “E” rated franchise. Be warned, some of these entries are very disturbing, so read at your own risk!