Hello everyone, and welcome to my Christmas post. I have decided to list two fascinating Christmas cocktails. I will be taking Christmas off, so this will be the last post until the next week. So, have a wonderful Christmas, and I’ll see you guys next Friday.

Hello fellow art lovers! It’s Monday, and my Gallery is open once again! I hope you guys are  ready for some great new works. Now, have fun exploring my Gallery!

This is a very sublime work by Japanese artist, Aoshima. It is both beautiful and unsettling. The main focus of the painting is the female figure with her internal organs exposed. Although this sounds horrific, Aoshima depicts it in way of surreal beauty. The organs are very colorful, and remind me of a bouquet of flowers. I also believe the work to be sexual in a few ways. The woman appears to be sitting on an oyster shell, and this could be reference to Botticelli’s Birth Of Venus. We also see a white snake above her heart, and this could be a depiction of lust. The background is a brilliant shade of blue, and this puts the view at ease. It is hard to believe that visceral works can be beautiful, but I believe that this art work completely describes this phenomena. I would love to hear what you guys think of this piece in the comments’ section below.

Time for another insane work by “Computer Guru”, Larry Carlson. This work blends real-life images with bizarre patterns and colors. The piece takes place in space, as seen by the starry sky that makes up the background. There are three objects that resemble abstract lava lamps. Inside each of the “lamps” we see a different colored human figure. The weirdest part of the work is the purple-robed figure with a spherical owl as a head. Another human figure is seen with a pot for a head. I love how Carlson takes the style of collage, and transforms it into an epic and unique work of Surreal genius. I would love to hear your thoughts on the piece in the comments’ section below. 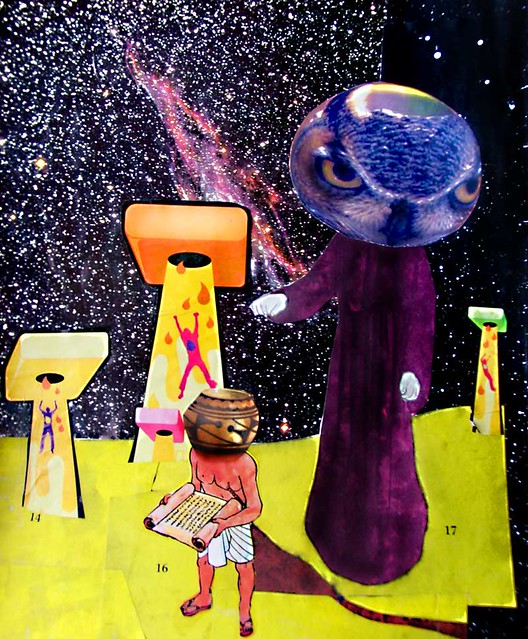 Hello fellow music lovers! It’s Thursday, and I’ve decided to create a brand new topic. The creation of Music has brought on many fantastic genres and bands. This post will be focused on finding some rare, strange, and outrageous types of music. Now, grab your headphones, and let’s jam!

Hello fellow comic book fans! It’s Tuesday, and you know what that means! Yes, it’s time for us to take another look at comic books’ weirdest characters. So, grab your favorite graphic novel, and let’s begin!

Tike was a young man when he discovered his superpower. He joined the superhero team, X-Force, when a favorite member, Sulk, was killed. He began to enjoy his new life as a celebrity, however the other members seem to dislike his personality. Along with Doop, Anarchist is the only other X-Force member to survive a rescue mission gone awry.

Chemo is sentient vat of toxic waste. He was created by Professor Ramsey Norton as a combatant of all disease. Unfortunately, his experiment grew into a 25ft monster and the poor doctor was killed instantly. Being a mindless monster, Chemo started to reek uncontrollable havoc in the city. He was eventually stopped by the Metal Men, who explode, destroying Chemo from the inside out.

Hello fellow art lovers! It’s Monday, and my Art Gallery is open once again! I hope you guys are ready for some fascinating works. Now, have fun exploring my Gallery!

This is a very funny painting by “German Surrealist”, Max Ernst. The work has many strange objects that defy the laws of physics. There are two bird people that appear to be fused together. Their mouths are wide open, and there incredibly long tongues are exposed. We also see some strange hairy snakes with snarky expressions on their faces.  The work is very absurd, but I believe that this adds to the genius of the piece. Tell me what you guys think of this piece in the comments’ section below.

This is a fantastic piece by “Computer Guru”, Larry Carlson. It is a beautiful nature scene with a gorgeous multicolored sky. The leaves are like stained glass windows, and the Sun shines through them like a kaleidoscope of color. Everything about this work is awe-inspiring, and leaves the viewers with giant grins. This is definitely one of Carlson’s best works. I hope you guys enjoy it as much as I do. 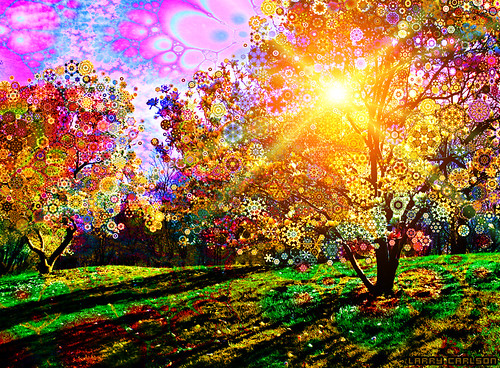 Hello fellow mixologists! It’s Thursday, and my Pub is open once again! I hope you guys are ready for some awesome drinks. Now, let me fix you up something special!

Directions: Mix all three on the rocks.

Directions: Shake the first three ingredients with ice in shaker. Pour in cocktail glass and pour carefully the creme de cassis in the middle of the glass.

Konbanwa, everyone! It’s Wednesday, and you know what that means! Yes, it’s time to take a look at some more fascinating yokai. Now, let’s go on a journey to the “Land of the Rising Sun”!